This quilt is called Homage To Sallie Ann. Made by Gillian Thomson, it won a red ribbon in the Mostly Applique 2 person Category. The quilt is designed by Di Ford, her inspiration came from a quilt made by Sarah Ann Nelson Edwards in the 19th Century. 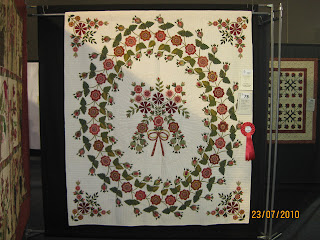 This Quilt is called Red And Green. Designed and made by Marlene Bieniak, it was based on the Whig Rose Block. It won a blue ribbon, and was entered in the Mainly Applique Amateur Category. 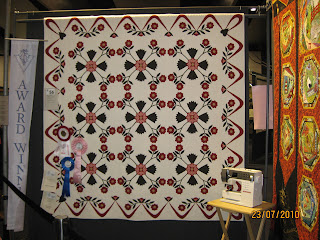 This Quilt, called Finding The Way, was made by Carolyn Konig. Inspired by the Francis Scott Key Family Quilt, seen at Houston.It has almost 3,000 triangles. Entered in the Traditional Professional Category, it won first place, and also won the award for Retaining The Tradition. 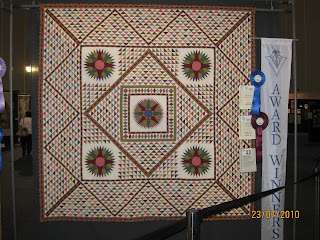 This Quilt called Flowers For Dorothy, was made and designed by Anthea Bradley. Entered in the Mainly Applique 2 person category, it won 1st prize, and also came runner up in Best Of Show. 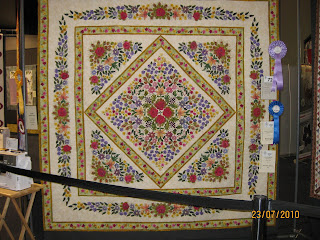 This quilt, made and designed by Linda Steele, won among other awards, The Best In Show.
It was entered in the Open - Mixed Technique Category. Many agreed with the choice of winner, others most defiantly didn't 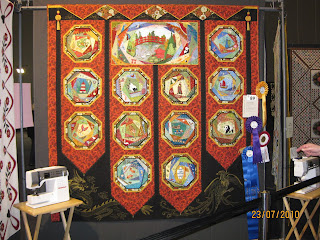 This quilt is called Circles From The Past, designed and made by Sandra Thomas. It was in the Traditional Professional Category. 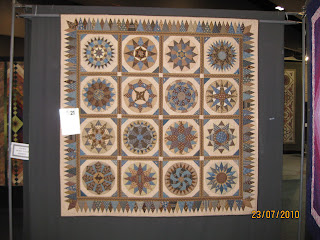 This Quilt is called 25's Enough. Made and designed by Helen Hayes, it was entered in the Traditional Professional Category. The Sunburst block is taken from the SS Larken Quilt pattern, purchased from The Shelbourne Museum. 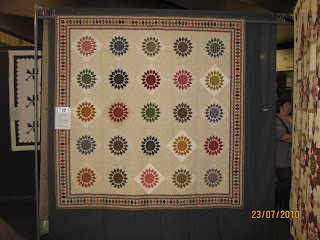 Well, that all folks!! l hope you have enjoyed the photo l had to share. l could go on for ever, but!!!! Of course there were many many other quilts on display that l didn't take photos of. Some just didn't appeal, or held no interest. That doesn't take away from the fact that they were lovely quilts.

l need to get busy with my camera again, and take some photos of what l have been working on lately. A few swap blocks and a quilt for a magazine later in the year.

l am also in the midst of a mini shop hop, as l tour the country, dropping off flyer's and raffle tickets for our up coming Quilts In The Barn exhibition. Its a busy few weeks, not much time for sewing, but loads of inspiration as l visit all the local quilt shops. Someone has to do it!!!

Thanks for Visiting,
Linda.

l love getting your comments. However, if you are a non-reply blogger, l can't reply.

Linda C
l have been quilting for over 20 years in between raising my family, and trying many other crafts. My first love is antique quilts and reproducing them using reproduction fabrics.

All photo's and written works on this Blog are the property of Quilts in the Barn. Please do not copy without written permission.